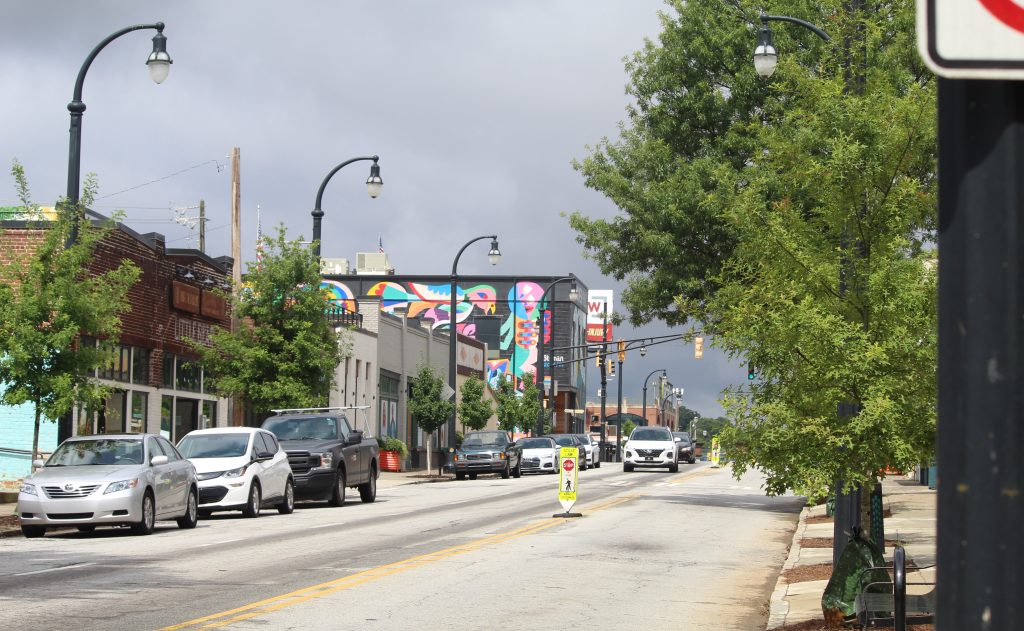 Twenty-five years ago, Summerhill was buzzing with activity. There was the opening and closing ceremonies of the Olympic games and in between, moments like Michael Johnson sprinting toward his gold medals.

But drive through the neighborhood today, and you mainly hear the sound of construction.

“Just rapid growth and activity,” said Phil Olaleye, president of the Organized Neighbors of Summerhill. “And that can be good or not-so-good, depending on who you speak to.”

Sitting at a table outside Hero Doughnuts & Buns, one of the new restaurants in the area, he says residents here aren’t spending too much time dwelling on the anniversary of the Olympics.

“I think the aftermath just showed, it didn’t really have much of an impact on the neighboring communities. And the same can be said about the Braves,” said Olaleye.

It was only after the Braves moved to Cobb County four years ago that things began to slowly change in Summerhill. More businesses have opened up and more new residents are moving in.

This is a community that’s looked for a grocery store for decades⁠—in terms of truly being an FDA ‘food desert’⁠—Summerhill has been one.”

The company behind a lot of the redevelopment is Carter, whose president and CEO Scott Taylor says he’s aware that a developer coming in brings with it concerns about displacement and equity. He says that’s why they’ve made it a point to regularly attend neighborhood meetings and listens to those worries.

One way to accomplish this, Taylor says, is to bring businesses to the area that benefit all residents – both those who’ve been in Summerhill for a long time and those who’ve just moved in.

Publix is set to break ground this summer on a grocery store. It’s scheduled to open before the end of next year. Taylor calls that a major step forward.

“This is a community that’s looked for a grocery store for decades⁠—in terms of truly being an FDA ‘food desert’⁠—Summerhill has been one,” said Taylor.

He says another top priority is making sure it’s easy to get around. Streets in the neighborhood that had long ago been paved over for parking, are being rebuilt. He says MARTA and the city of Atlanta have plans to bring a bus rapid transit line to the neighborhood.

And building up this infrastructure is important, he says, as more and more people start to call the area home.

A new apartment building called 565 Hank, a nod to Hank Aaron, opened this summer and is 30% leased. A hundred new townhomes are coming as well as other residential developments. That’s in addition to the 600 Georgia State students who’ve already moved into a new building in Summerhill, Aspen Heights.

“We love that mix, so we don’t anticipate adding more student housing down here, because, we really do, again, think of this as a neighborhood,” said GSU’s Bharath Parthasarathy, who is overseeing the university’s part in Summerhill. GSU does, however, plan to keep expanding its sports presence here.